Crafting is big business for two Calhoun County women who have transformed private homes into dedicated spaces for scrapbookers and quilters.

Every weekend and certain weekdays, Katrina Asselin, owner of Riverside Retreats in Marshall and Kim Hall, which helps manage Creekside Craft Retreats in Emmett Township, host crafters who come from all over the United States to gather with friends and family to work on projects, catch up, and share late-night meals and snacks together.

Asselin compares these gatherings to the modern version of quilt bees.

“It’s a girls’ weekend with friends. That’s one of the main reasons people do this,” says Asselin. “I love doing this as a business because people create memories together and engage in face-to-face conversation. People love to be artistic.

Although each of the six homes she rents is specifically designed to accommodate scrapbookers and quilters, she says the spaces also provide flexibility for guests who make cards or a number of other craft activities. Their work is done in large rooms with rectangular shaped tables that provide up to six feet of work space for each craftsman that include special lighting.

The 7,000 square foot house that houses Creekside Crafting Retreats owned by Glenda Brewer, Hall’s mother, has a large room with a similar layout to that offered at Riverside Retreats. 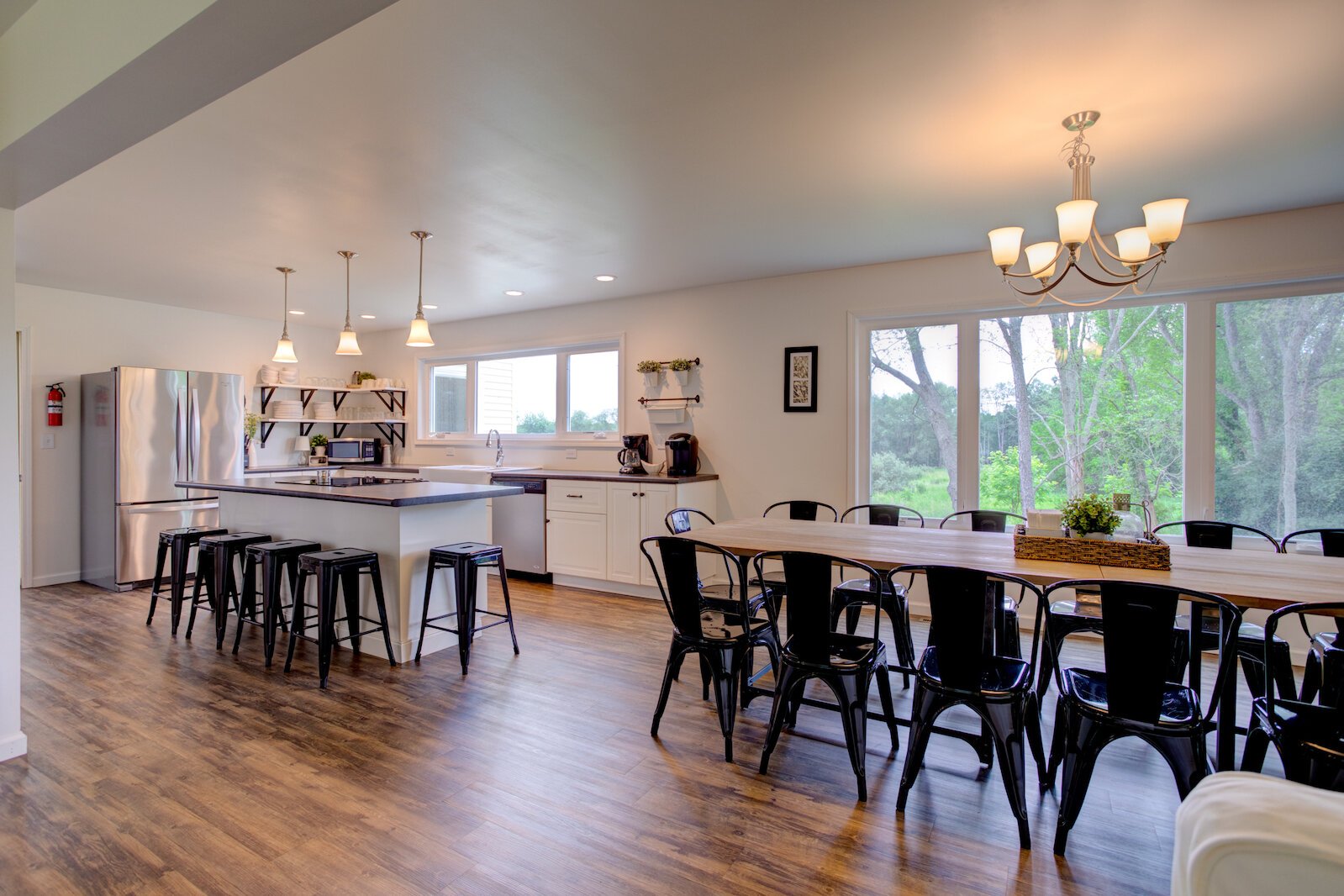 Inside Craft Retreat Homes owned and operated by Riverside Retreats.Hall says these get-togethers are a way for Creekside guests to relax and recharge “because you’re with a group of people who love and do the same things you do.” You get ideas from each other too, like quilt with paper. This table can do one thing and this table can do another.

The idea of ​​establishing weekend retreats as businesses grew out of Asselin’s and Hall’s own interests in craftsmanship. Both passionate about scrapbooking, they say they noticed a need they could fill.

Hall says she first heard about these retreats when friends in North Carolina where she lived asked her to join them. When she moved to Battle Creek 11 years ago to be closer to her mother and help her with two tanning salons she owns, Hall says she discussed the idea of ​​these retreat spots with she.

“If you like crafts, you hear about this stuff. They reach out and tell everyone about it,” Hall says.

Brewer bought the house on Creekside Drive in Emmett Township with the idea of ​​opening it as a retreat center for artisans. Hall, Brewer’s son Dan, and granddaughter Ashley Belcher (Hall’s daughter) all help maintain and operate the business, which opened in 2017.

The three-story home has nine bedrooms with various twin bed configurations, multiple bathrooms, and two fully equipped kitchens. There are also lounges where people can chat, watch TV, play cards or board games. It can accommodate up to 35 people. 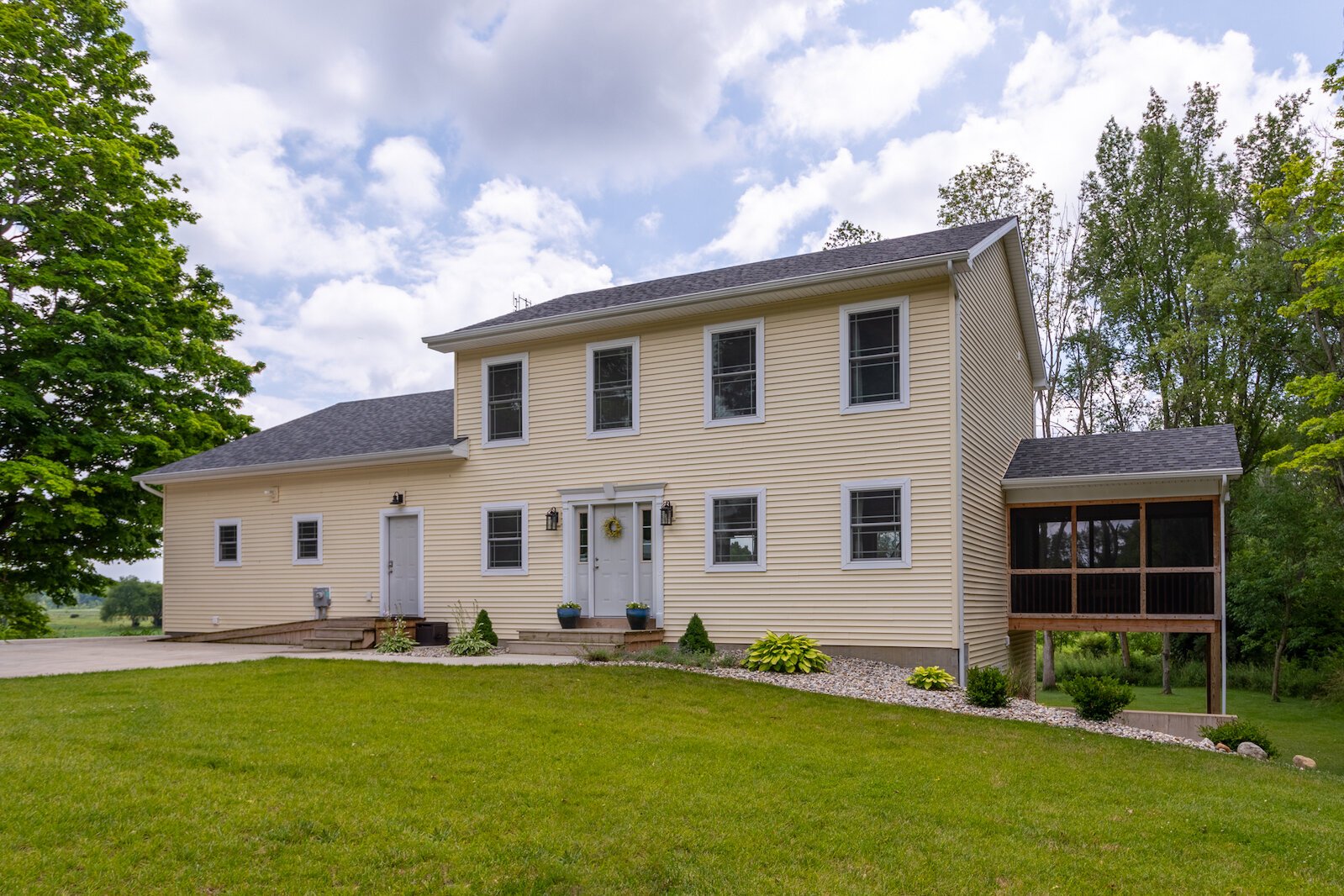 Creation of retirement homes owned and operated by Riverside Retreats.The six Asselin residences can each accommodate between 8 and 16 people. In addition to a main craft room, each of the houses has a fully equipped kitchen, dining room, and living room. Five of the houses are all lined up along B Drive, with the sixth one two miles away.

The first house Asselin used to create retreats was the house she and her family originally lived in. She and her husband, a buyer for Henckel Chrysler Jeep in Battle Creek, built a house next door that became their primary residence.

In total, they have built four new homes and renovated two, including the house next door, since Riverside Retreats opened in 2009.

Like Hall, Asselin learned of the existence of these retreats by going there. A former nurse, she was introduced to scrapbooking by a Creative memories consultant. By then she had left her job as a nurse in Coldwater to focus on raising her two children and became the mother who volunteered to help with arts and crafts projects at school.

“My children were very small at the time and scrapbooking was a fun way to create albums and record family stories,” says Asselin. “The consultant rented a B&B in Grand Beach and I was going there for the weekend. It was a girls weekend where we worked on photo albums, talked and got to know other people.

When her son started kindergarten, she says she thought her husband would tell her it was time for her to go back to work. 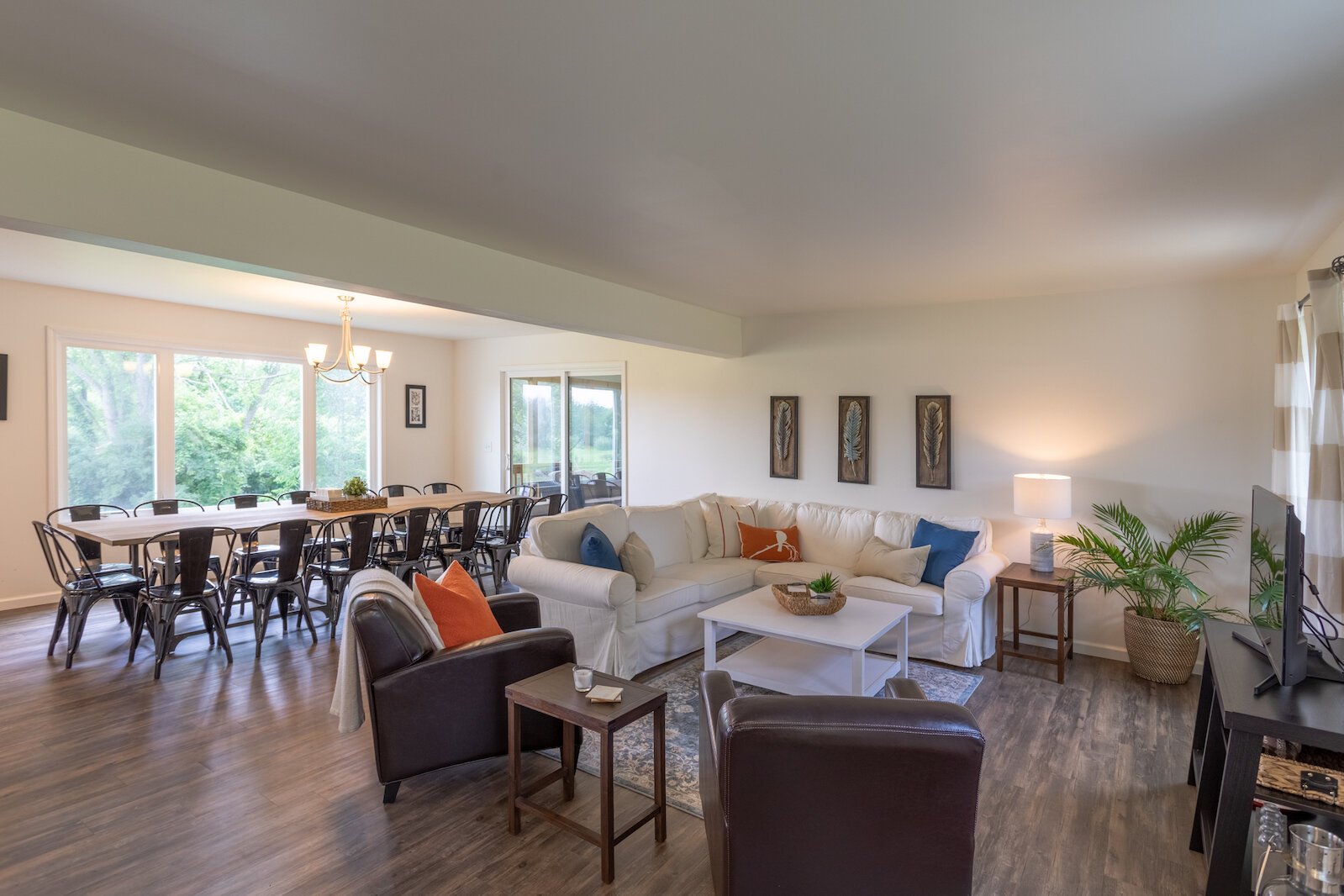 Inside Craft Retreat Homes owned and operated by Riverside Retreats.“I loved being a talking mom at home and had the idea to start offering weekend retreats as a business,” says Asselin. “We are good savers. We made a plan for the finances and what we needed to do. It took a year or two to develop the plans. We bought the neighboring property to build a new house to move into to become our family home and the old house was turned into our first scrapbooking house. I thought ‘One house and I’ll be good.’ I never intended to develop like we did.

But, the request made him reconsider.

Plenty of choice in the Midwest

In the Midwest, Michigan and Minnesota appear to have the most scrapbooking retirement facilities, according to a map on the Retreats & Co website.. The next highest numbers are in Tennessee, Virginia, and West Virginia.

According to Creative Industries Association 62% – nearly two-thirds – of American households participate in a craft hobby. The AFCI says craftspeople don’t stick to one craft, but typically participate in multiple crafting hobbies. Only 16% of artisans practice a trade, while 39% participate in 2 to 4 and 45% are involved in five or more creative hobbies.

Millennials also engage with their children in the love of crafts. The AFCI says, “Millennial parents are getting involved with kids’ crafts because they see crafts as a way to bond with their children. They also recognize the benefits of their children’s participation in these activities for creative development and hand-eye coordination. » 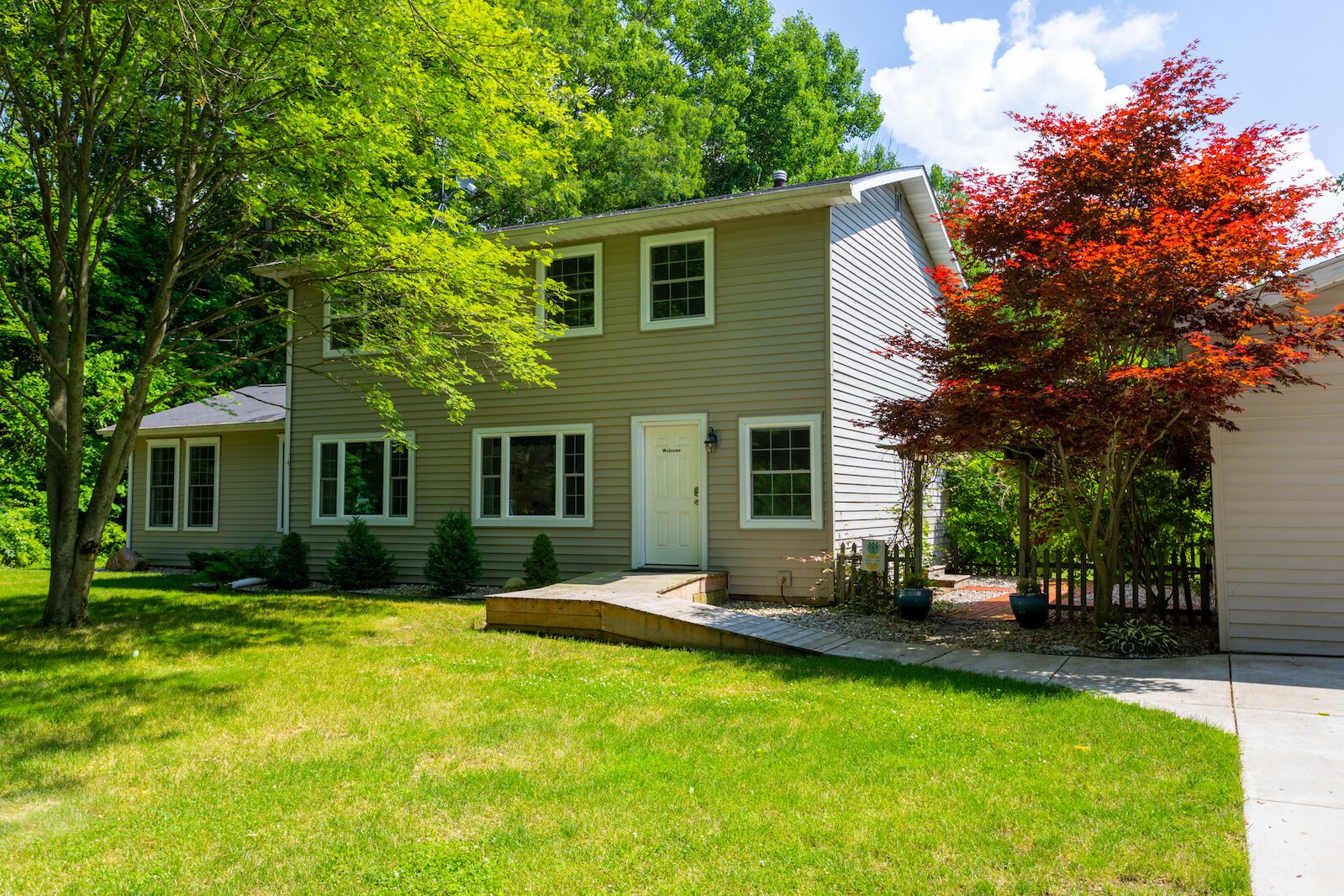 Creation of retirement homes owned and operated by Riverside Retreats.“Today’s artisans are the youngest they’ve ever been,” said Mark Hill, CEO of AFCI for a story in Forbes magazine. “The largest percentage of artisans (41%) are millennials, ages 18-34. Some 36% are between 35 and 54 years old and 23% are 55 and over.

Asselin and Hall say the majority of their guests are still women over 40 who focus on scrapbooking and quilting and use these retreats as opportunities to get together with friends and family, some of whom live in other parts of the country. The majority of Asselin’s guests come from within a five-hour radius of Marshall, but she has also hosted women who arrive from Florida and one woman who arrives from Alaska twice a year to meet friends for weekends. crafting ends.

Hall says a lot of her mom’s clientele is from the Battle Creek area, but she also has people who come from areas like Ann Arbor, Detroit and Holland and a large group who come in from different parts of the United States. United.

“Once they come, they book again,” says Hall. “We’ve started booking through 2024 because it’s hard to find a place that gives you room for a lot of people to come in.”

Asselin says she also has lots of repeat customers who book the same weekend year after year.

“From January to March and from September to November, we are at full capacity,” she says.

Typical retreats run from Thursday to Sunday, giving cleaning crews time to come in and prepare homes for the next group of visitors. Asselin and Brewer and the participation of members of his family during these retreats are limited to welcoming guests and stopping by to see how they are doing or if they need anything. Guests are responsible for their own meals, often prepared in nursing home kitchens, and any supplies or equipment they need to work on their projects.

“The whole band doesn’t do everything together,” says Hall. “Some may go out to eat and some may prepare a morning and evening meal and have snacks. It’s just a relaxing weekend where they can also watch movies or play cards.

Asselin says COVID and the constraints it has placed on people’s ability to gather have really heightened the importance of being able to come together and spend time with each other. She says she thinks that’s why these weekend retreats continue to be popular.

“People like to meet and even more after the COVID. We were the busiest we’ve ever been in 2021 because people just wanted to be together,” she says. “These retreats give them the opportunity to be with friends and relax and not have to do housework and record and create family memories that they can pass on.”